For online Master of Science in Digital Media Management student Alex Rosenberg, gaming is not only a medium to experience great stories, but also a community where strangers can build long-lasting relationships. 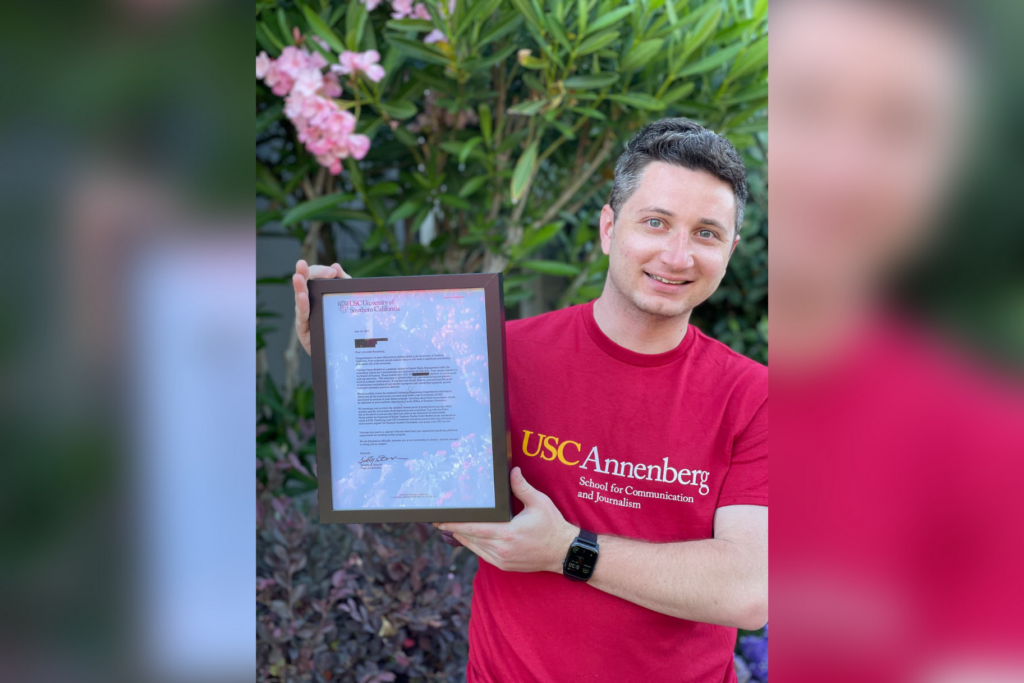 Throughout the COVID-19 pandemic,  millions of people across the world have been able to escape isolation by immersing themselves in online gaming.

While social distancing and stay-at-home orders turned many into new gamers, this sense of community certainly wasn’t a new phenomenon for industry veterans. From Animal Crossing to Among Us, gaming has been a longtime refuge for strangers seeking connection and acceptance.

Alex Rosenberg, the media director of Zelda Universe, can attest to just that: It was through the gaming industry that Rosenberg not only found himself, but also a supportive, enduring circle of colleagues and friends.

“If we’ve learned anything from the last year, it’s that this is a space where everyone can connect,” Rosenberg said. “It doesn’t matter your economic status, where you fall on the political spectrum. Beliefs, thoughts, ideals, cultures, this is a space … [to] experience great stories that hit people in different ways. And it’s why I think the industry is so great.”

Although Rosenberg has been an integral player in shaping the Zelda audience for almost a decade, the former guide writer had aspirations to deepen his understanding of data and analytics reporting to further engage his core users.

That’s where the online Master of Science in Digital Media Management (MSDMM) program came in. Offered by the USC Annenberg School of Communication and Journalism, the MSDMM prepares students to become leaders in the ever-evolving media landscape and make ethical, data-driven decisions, all with the goal of building equitable, diverse teams.

During his initial search for graduate programs, Rosenberg considered his alma mater — Rutgers University — and a few other colleges, but it was the MSDMM curriculum that ultimately drew him to USC. With courses in media buying, analytics, and digital media principles and theories, Rosenberg was confident the program would help propel him into an influential leadership position, hopefully at a gaming studio or production house.

“I hope to exit this program with the knowledge that will help enhance the skills that I have been honing for the past 15 years … I’ve worked so much with the community in celebrating a franchise. The next step is to be actively part of these companies who are creating these games. And that’s very much what I would love to be the end goal: to work at a studio, either indie or major, to celebrate the games that they’re creating and engaging with the community at large,” he said.

Now in his spring semester, Rosenberg has already been able to apply some of the MSDMM learnings to his career experience, specifically when it comes to addressing issues such as racism and misogyny. The program, Rosenberg noted, has taught him to “hold a magnifying glass” to these ethical, industry-wide concerns.

“The video game industry has an ethics problem … and when I was talking to my classmates about it, it was very surprising to hear how ethics is handled in other industries because the video game industry does not have very good ethics practices in place at studios, and it’s been a major point of conversation. And so being able to recontextualize it in an academic way has been useful,” he said.

Though Rosenberg will be the first to admit the field still has major strides to overcome, he believes the gaming world remains a safe haven for those in search of community. In 2020 alone, a gamut of game designers, voice actors, competitors, streamers and labor activists made significant steps towards inclusion, addressing inequities in visibility, accessibility and more.

“With more diversity coming in the field, with more people being able to tell their stories, I think we’re going to eventually get there, and I’m excited to be able to see that point when it eventually happens,” he said.

Overall, for Rosenberg, it’s paramount to not only embrace the gaming sector as a medium to experience great narratives, but to also build long-lasting relationships and escape the overwhelming issues facing society today. More personally, however, the industry is where he truly found himself.

“Video games have helped me essentially figure out everything about myself, through the people who I’ve gotten to meet as part of this industry,” he explained. “One of the things that I realized this year through taking to people in games is that I fall in the LGBTQ spectrum as asexual/demisexual. And the way I found out was talking with my friends that I had met through this industry playing Dead by Daylight … And it’s helped me really understand myself, and I won’t let that go.”

Moving forward, Rosenberg is excited to see how the gaming sector will continue to respond to shifts brought upon by the pandemic, such as a deemphasis on live tradeshows in favor of digital events, and leaning into “shadow dropping” stunts over pre-release media plans and product announcements.

And with his MSDMM, he will be even more prepared to lead teams into the next era of gaming trends.